ENTRY LIMIT – Regardless of the method of entry (online or mail-in) you may only enter one (1) time during the Sweepstakes Period.

ELIGIBILITY – The Sweepstakes is only open to legal residents of the fifty (50) United States (excluding Rhode Island, Alaska, Hawaii and the District of Columbia) who are twenty-one (21) years of age or older at the time of entry.

Win Grammy Museum VIP Package and a trip to Los Angeles for two!

ENTRY LIMIT – There is a limit of one (1) entry per person per day.

ELIGIBILITY – The Giveaway is open to all legal residents of the United States (excluding Hawaii and Alaska) and the District of Columbia who are at least 18 years or older at the time of entry.

PRIZES – Grand Prize : The Grand Prize Winner will receive a Grammy Museum VIP Package and a trip to Los Angeles for two (2). The Grand Prize includes round-trip coach class airfare for two (2) from an airport within the 48 contiguous United States reasonably close to the Grand Prize Winner’s city of residence to Los Angeles. All travel arrangements will be made by Winspire Sports and Entertainment as a designee of Sponsor, whose decisions regarding the itinerary are final. Selection of airline and airport shall be at the discretion of Sponsor or its designee. Airfare is subject to availability. Airfare must be booked by January 1, 2017 . The Grand Prize also includes a three (3) night stay in one (1) standard Fairmont room at the Fairmont Miramar Hotel, Santa Monica, daily breakfast for two (2) at the Fairmont Miramar Hotel during the Grand Prize Winner’s stay (up to a maximum of $25 per person, per day), two (2) entry tickets to the Grammy Museum in Los Angeles, CA, a private custom behindthescenes tour for two (2) to the Grammy Museum and one (1) $150 American Express gift card towards dining at L.A. Live in Los Angeles. All hotel and airfare taxes are included. The Grand Prize Winner will also have access to Winspire’s booking and concierge service for add on travel and trip arrangements at his or her own expense. All other expenses not specified above including, but not limited to, baggage fees, ground transportation, meals, beverages, gratuities, incidentals, and taxes are the sole responsibility of Grand Prize Winner. The Grand Prize must be booked a minimum of sixty (60) days in advance. Certificates and gift cards cannot be replaced if lost, stolen or destroyed. The estimated retail value of the Grand Prize is $5,500.00.
Monthly Prizes : Each of the six (6) Monthly Prize Winners will receive a case of LITTLE DEBBIE Fudge Rounds (the “Monthly Prize”). The estimated retail value of each Month Prize is $28.64.

Win a Carnival cruise to the Bahamas & more!

ENTRY LIMIT – Maximum one (1) entry per person per day during the Giveaway Period.

ELIGIBILITY – The Giveaway is open to all legal residents of the fifty (50) United States and the District of Columbia who are eighteen (18) years old or older (nineteen (19) years old or older for Alabama and Nebraska residents) at the time of entry. The Giveaway is also open to all legal residents of Canada (excluding the province of Quebec) who are the age of majority in their province/territory.

PRIZES – One (1) Grand Prize: Grand Prize Winner will receive a Four (4) Day Carnival Cruise to the Bahamas for four (4) people. Prize Package includes; a four (4) day Carnival cruise to the Bahamas (one room/cabin, quad occupancy); coach airfare for four (4) people from a Sponsor-specified city of departure (to be determined based on where the Grand Prize Winner resides at Sponsor’s sole discretion) to Miami, Florida; four (4) tickets to the Swim with the Dolphins excursion in Freeport, Bahamas (must be twelve (12) years of age or older to participate in this excursion); $500.00 in spending money (may be awarded in the form of a Visa gift card); and a Little Debbie® product prize pack. Approximate Retail Value: $3,530.00.
Ten (10) Weekly First Prizes (one (1) awarded per Weekly Entry Period): Each Weekly Winner will receive one (1) Ultimate Beach Kit. Ultimate Beach Kit consists of the following: one (1) umbrella, one (1) Wagon, one (1) set of Backpack Chairs, one (1) Towel, one (1) Sunscreen Product and one (1) fifteen (15)-piece Beach Sand Toy Set. In addition, the Weekly First Prize winners will receive one (1) Little Debbie® Products Prize Pack (consisting of a selection of Little Debbie® snack food products). Approximate Retail Value: U.S.$412 per prize.
Ten (10) Weekly Runner-Up Prizes (one (1) awarded per Weekly Entry Period): Little Debbie® Products Prize Pack. Approximate Retail Value of each Weekly Runner-Up Prize: U.S.$10 per prize.

Well, there wasn’t a weekly round-up last week. Sickness visited my home – both for me and my husband and I spent a lot of time at the doctor’s office with my hubby and even the ER, but all is going much better this week – thankfully! I’m trying to get caught with the sweepstakes while still dealing with some recovery – so be patient with me. I love sweepstakes, but there are other things more important and family is at the top of my list of what’s most important! Hope you’re surviving this heat wave we’re having. I’m ready to just hang out in the pool to keep cool! Remember, Sundays I will only post the weekly round-up so you can get caught up and see if you missed any of the sweepstakes posted during the past week. Have a great Sunday and check back tomorrow for new sweepstakes! I’ll also share winner’s stories here, so if you win a prize, let me know and you can be a part of the weekly round up!
AND THE WINNERS ARE…

Did you win a prize? I’d love to hear about it and share your winning story right here on the weekly round-up, just leave a comment on the blog.

The Thompson’s Company 2015 Deck of Your Dreams Sweepstakes – ends Oct. 3

Enter every day to increase your chances of winning!

END_OF_DOCUMENT_TOKEN_TO_BE_REPLACED 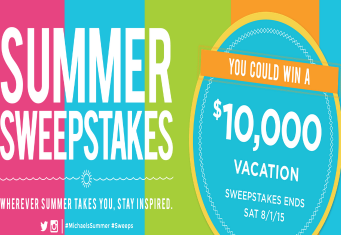 ENTRY LIMIT – Only one (1) Entry per individual during the Sweepstakes Period is allowed; multiple entries using different email addresses for a single individual will be disqualified.

ELIGIBILITY – The Michaels Summer Sweepstakes is open only to legal residents of the 49 continental United States (excluding Hawaii), Washington, DC and Canada (excluding the Province of Quebec) who are at least eighteen (18) years of age as of June 14, 2015.

PRIZES – The Grand Prize Winner will receive a Grand Prize consisting of a $10,000 USD Visa Gift Card (the “Grand Prize”).
The six Weekly Prize Winners will each receive one (1) one hundred dollar ($100 USD or CAD, as applicable depending on entrant’s country of residence) Michaels Gift Card 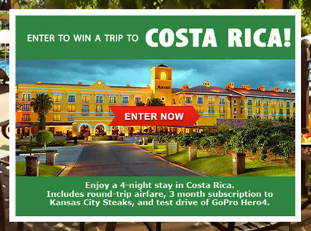 ENTRY LIMIT – Limit one (1) entry per person during the Sweepstakes Period, regardless of method of entry.

ELIGIBILITY – The Win a Trip to Costa Rica Sweepstakes Official Rules is open only to legal residents of the fifty (50) United States and the District of Columbia (excluding residents of Puerto Rico, and all other U.S. territories and possessions) who are at least twenty-one (21) years old at the time of entry.

ELIGIBILITY – The Pirelli Ultimate Roadtrip Sweepstakes & P Zero™ All Season Plus (PZAS+) Giveaway is open to legal residents of the fifty (50) United States and the District of Columbia who are eighteen (18) years of age or older and licensed drivers possessing valid driver’s license at the time of entry.

ENTRY LIMIT – Entry is limited to one (1) submission per entrant per day.

ELIGIBILITY – The Best LifeTM Promotion is open to all legal residents of the U.S. who are at least eighteen (18) years of age as of June 1, 2015.

ENTRY LIMIT – Limit one (1) entry per person per day.

ELIGIBILITY – The Sweepstakes is open to legal residents of the fifty (50) United States and the District of Columbia who are at least eighteen (18) years of age and older.

PRIZES – Up to thirty (30) total prizes will be awarded. Each prizewinner will receive four boxes of Tetley Iced Tea Blend and one 3-Gallon Beverage dispenser. The approximate retail value (“ARV”) of each prize is $57.53.

Win a $10 Restaurant eGift Cash or other great instant-in prizes!

ELIGIBILITY – This Road Trip Game is open to individual legal residents of the 50 United States and Washington, District of Columbia who are age 13 or older as of date of participation.