Win a trip to Nashville and $1,000 spending money!

ENTRY LIMIT – Limit: One (1) entry per email/household during the Promotion Period.

ELIGIBILITY – Cinemark’s MercyMe Nashville Sweepstakes is open only to legal residents of the fifty (50) United States and the District of Columbia who are at least eighteen (18) years old at the time of entry. 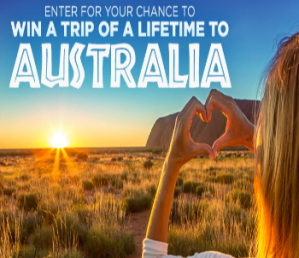 Win a trip for 4 to Australia!

ENTRY LIMIT – Limit of one (1) entry via Website per Internet-connected device per day during the Promotion Period.

ELIGIBILITY – The Blue Lizard® Australian Sunscreen Win a Family Trip to Australia Sweepstakes is open only to legal U.S. residents who are at least eighteen (18) years old and have internet access and a Facebook account at the time of entry.

PRIZES – ONE (1) GRAND PRIZE WINNER: The Grand Prize winner will receive a 7 day, 6 night trip for four (4) to Australia, including airfare, lodging and activities. The Approximate Retail Value (“ARV”) of Grand Prize is $12,000.00. Actual value may vary. Any stated difference between the approximate value and actual value of Grand Prize or any substituted prize will not be awarded.

ENTRY LIMIT – Limit one entry per person, per entry site, per day.

ELIGIBILITY – This Promotion is open only to legal residents of the 50 United States and D.C. who are 21 years of age or older as of the Promotion start date.

Win a trip for two to Dublin, Ireland!

Answer to the question on the entry form: ROOSTER

ENTRY LIMIT – Limit: One (1) Entry per person per day regardless of whether entrant has more than one email address.

ELIGIBILITY – The Sweepstakes is open to legal residents of the 50 United States, including the District of Columbia, and Canada (excluding Quebec), ages 21 or older at the time of entry.

PRIZES – One (1) Grand Prize winner will receive a trip for two (2) people, Grand Prize Winner and one (1) guest, to Dublin, Ireland.

-Round-trip, coach-class airfare for two (2) people, winner and one (1) guest, to Dublin, Ireland, from winner’s nearest major airport, as determined by the Sponsors;
-Seven (7) days and six (6) nights first-class hotel accommodations, based on single-room and double-occupancy, in Dublin, Ireland at a hotel of the Sponsors’ choice;
-$500 USD cash allowance; and
-Car rental for duration of stay. Rental car portion of prize may only be available if winner or his/her travel companion is 25 years of age or older and has a full valid driver’s license. If winner or winner’s guest are both under the 25 years of age and/or do not have a valid driver’s license, the rental car portion of the prize will be forfeited and no other compensation will be provided.
The ARV of Grand Prize is: $6,500 USD. The ARV may vary based upon dates of travel and point of departure. The difference between the ARV and actual value of the Grand Prize will not be awarded.

Trip must be taken by 3/31/19 or prize will be forfeited in its entirety. The prize package will be awarded within approximately 45 days after the winner is verified.

ELIGIBILITY – The Juicy Juice® “Flavor Discovery” Instant Win Game is open to all legal residents of the 50 United States (including D.C.) who are 18 years of age or older or the age of majority in their jurisdiction of residence, whichever is greater, at time of participation. 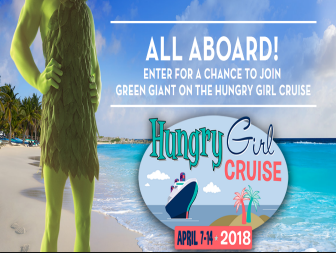 ENTRY LIMIT – LIMIT one (1) entry per person, per email address during the Sweepstakes Period.

ELIGIBILITY – The Sweepstakes is open to legal residents of the fifty (50) United States and the District of Columbia, who are 21 years of age or older as of the Sweepstakes start date.

PRIZES – One (1) Grand Prize winner will receive a Hungry Girl Cruise for two which is taking place April 7 – 14, 2018 aboard Holland America’s ms Nieuw Amsterdam. This prize package includes seven (7) nights’ accommodation for two (2) (one stateroom, double occupancy) along with two (2) round-trip tickets from the major gateway airport nearest the winner’s residence to Ft. Lauderdale, Florida (not to exceed $600 per person). More information on the Hungry Girl Cruise can be found online at http://cruise.hungry-girl.com. The Approximate Retail Value (“ARV”) of the Grand Prize is $4,200. The Grand Prize winner and their companion are responsible for: any and all costs, expenses and taxes not expressly described herein including, but not limited to, transfers to the ship, shore excursions in the various ports and onboard services including sodas, alcoholic beverages, bottled water, phone calls, Internet access service, spa treatments, laundry/dry cleaning, professional photographs, casino gambling, gratuities and obtaining sufficient personal travel insurance prior to departure, if desired. Gratuity fee is $13.50 per person/per day which will be charged to the Grand Prize winner’s onboard account at the end of the cruise by Holland America. The Grand Prize winner and his/her travel companion must travel together on the same itinerary and each are responsible for securing valid passports and/or any additional required travel documents at their sole expense prior to travel. Actual value of the Grand Prize may vary depending on exact travel itinerary and any difference between the stated ARV and actual value of the Grand Prize will not be awarded. The Released Parties are not responsible if the Grand Prize, or any part thereof, cannot be awarded due to cancellations, delays or interruptions for any reason. Cruise must be taken April 7 – 14, 2018. 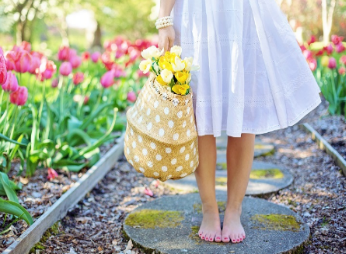 ENTRY LIMIT – Limit of one (1) Entry per person/email daily.

ELIGIBILITY – The Zing Bring on the Spring Sweepstakes is open to: legal residents of the fifty (50) United States and the District of Columbia, who are at least eighteen (18) years of age or older, all at the time of entry. 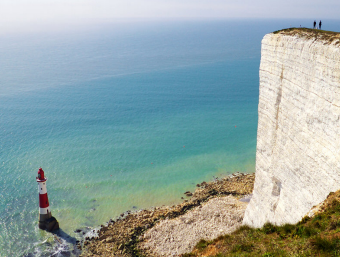 ENTRY LIMIT – There is a limit of one (1) online entry via the online entry form (known as the “Base Entry”) per eligible person per day during the Promotion Period, regardless of the number of email addresses or accounts a person may have.

ELIGIBILITY – The VICTORIA Sweepstakes is open only to permanent legal residents of the fifty (50) United States and the District of Columbia (but excluding Puerto Rico, Guam and all other U.S. territories and possessions), and Canada (excluding the Province of Quebec and Canadian territories) and who are physically located therein, who are 21 years of age or older and who possess a valid United States or Canadian Passport with an expiration date after March 30, 2019.

Each month during the Promotion Period, one (1) Monthly Prize Winner will be selected, via random drawing, to receive from shopPBS.org: (i) VICTORIA Season 1 on DVD; (ii) VICTORIA Season 2 on DVD; (iii) the book, Victoria & Albert: A Royal Love Affair, by Daisy Goodwin and Sara Sheridan; and (iv) a VICTORIA tote bag. Each Monthly Prize Winner remains in the drawing for the Grand Prize.

Commencing on August 22, 2018: VRC’s Oxford and Highclere Extension, which includes (A) hotel accommodation for three (3) nights in Oxford, England for two (2) adults (single standard room, double occupancy); (B) daily breakfast for two (2) adults; and (C) guided tours including Oxford College and Highclere Castle, and transport between London and Oxford;

Trip for two (2) adults who are 21 years of age or older on VRC’s British Isles Explorer 15-day, 14-night ocean cruise leaving London, England on August 25, 2018, ending in Bergen, Norway on September 8, 2018 (the “Cruise”). Air travel to and from any city in the U.S. will be booked by VRC as detailed in Paragraph 10(a) below. The Cruise is subject to the Terms & Conditions on the VRC website and VRC’s 2018 Passenger Ticket Contract which will be part of the 2018 ticket documentation. The Grand Prize Winner and his/her travel companion are solely responsible for any additional pre- or post- trip excursions, including the reservations and all costs related thereto, whether or not such additional excursions are booked through VRC;

Commencing on August 25, 2018: (A) accommodation on the Cruise for fourteen (14) consecutive nights in one Category DV1 stateroom, double occupancy; (B) all onboard meals, at the option of the Grand Prize Winner and his/her travel companion; (C) guided excursions selected by VRC and available to the Grand Prize Winner and his/her travel companion at every port of call during the Cruise as described below; and (D) access to VRC’s onboard Culture Curriculum® during the Cruise consisting of lectures and performances. The Cruise is anticipated to include the following ports of call (subject to change by VRC per the 2018 Passenger Ticket Contract which will be part of the 2018 ticket documentation for Cruise passengers): London and Dover, England; Dublin, Ireland; Holyhead, Wales; Liverpool, England; Belfast, Northern Ireland; Ullapool, Kirkwall, Edinburgh, Invergordon, and Lerwick, Scotland; and Bergen, Norway;

Is it spring yet? I so wish it were spring! We’re having cold weather and maybe some snow today and this week. I am not a cold weather person at all. The only really good thing about cold weather is, it’s a great excuse for a cup of hot cocoa. So, if it’s cold where you are, grab a cup of hot cocoa and enter some sweepstakes. Who knows, maybe you’ll win a trip to somewhere warm! Let me know if you won a prize recently and I’ll share it on the next weekly round-up!

AND THE WINNERS ARE…

Congratulations, winners – enjoy your prizes! Did you win a prize? I’d love to hear about it and share your winning story right here on the weekly round-up, just leave a comment on the blog.

Enter every day to increase your chances of winning!

END_OF_DOCUMENT_TOKEN_TO_BE_REPLACED 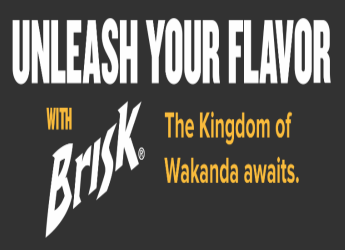 ENTRY LIMIT – LIMIT ONE (1) ENTRY PER PERSON PER DAY.

ELIGIBILITY – YOU MUST BE A LEGAL U.S. RESIDENT RESIDING IN ONE OF THE 50 UNITED STATES OR THE DISTRICT OF COLUMBIA THROUGHOUT THE PROMOTION PERIOD AND 18 YEARS OF AGE (19 in AL or NE) OR OLDER AT THE TIME OF ENTRY TO BE ELIGIBLE TO WIN.

PRIZES – One thousand (1,000) Instant Win Grand Prizes will be awarded, each consisting of one (1) $15 Fandango Promo Code* to see Black Panther™ (each, a “Grand Prize”). Actual retail value of each Grand Prize (“ARV”): $15. Any difference between the actual cost of the movie and the ARV will not be refunded. Grand Prize is only eligible for the Black Panther movie.