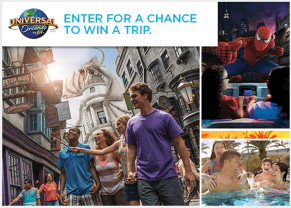 Win a trip to Universal Orlando Resort for up to 8 people!

ENTRY LIMIT – LIMIT one entry per person, per email address per day.

ELIGIBILITY – Sweepstakes is open to all legal residents of the United States and District of Columbia who has the age of majority in his or her state, or territory of residence as of the Sweepstakes start date.

PRIZES – Each of the seven (7) winners will be awarded a set of seven (7) Hallmark Keepsake Ornaments as revealed on the program, Home & Family. Total ARV is $875.