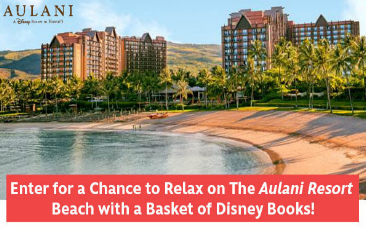 Win a trip to Hawaii and a stay at Aulani!

ENTRY LIMIT – Entries are limited to one (1) Entry per Member per day for each day during the Entry Period.

ELIGIBILITY – : Open to persons who are 13 years of age or older who are legal residents of, and physically located within, the 50 United States, or District of Columbia.

PRIZES – One (1) Grand Prize: One (1) Grand Prize will be awarded to a Winner which consists of a five (5) day / four (4) night vacation for Winner and up to three (3) guests to Honolulu, HI on dates selected by Winner, subject to restrictions listed below, availability and approval by the Grand Prize supplier. The Grand Prize consists of the following elements for the Group: [a] hotel accommodations at Aulani, A Disney Resort & Spa in Ko Olina Hawai’i (one (1) standard room/quad occupancy, including room tax) for four (4) consecutive nights; [b] if Winner’s residence is located other than on the Island of Oahu, round-trip coach air transportation on a Sponsor selected carrier between a Sponsor-selected major metropolitan airport near Winner’s residence (“Airport of Origin”) and the Honolulu International Airport; [c] if air transport is provided, airport/hotel transfers; [d] one (1) Disney Gift Card with a value of five hundred ($500) dollars (for Winner only and subject to restrictions). If the Grand Prize is awarded to a non-resident of California, the Grand Prize will also include an estimated cash amount of $399.28, which cash amount will be withheld to defray his/her payment of taxes due as a result of winning this Grand Prize. ARV: (i) $5,704.00 (if Winner is a resident of California); or (ii) $6,103.28 (if Winner is not a resident of California), which will vary depending upon point of departure and seasonal fluctuation of hotel rates and airfares. All benefits and payments in connection to the Grand Prize are personal to the Winner and are not redeemable for cash and neither is assignable nor transferrable.
Five (5) First Prizes (each a “First Prize”): Five (5) First Prize Winners will receive a Sorcerer’s Apprentice book and a limited edition lithograph. ARV: $40.