ELIGIBILITY – The 2021 Keystone Make Your Way Out Giveaway is open only to legal residents of the United States, the District of Columbia (excluding Hawaii and Alaska), and Canada (excluding Quebec) (the “Territory”) who are 18 years of age or older and located in the Territory at the time of entry. 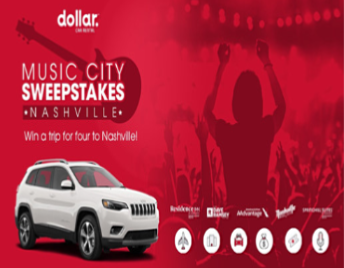 Win a trip for 4 to Nashville & more!

ENTRY LIMIT – You may only enter once – you may earn extra entries by sharing the sweepstakes and signing up for Dollar Express Rewards. There is a limit of fifty-two (52) entries per Entrant for the entire Sweepstakes Period regardless of the method of entry.

ELIGIBILITY – The Sweepstakes is open to legal United States residents residing in the forty-eight (48) contiguous United States and the District of Columbia who are licensed and insured drivers and at least twenty-one (21) years of age or older at the time of entry.

PRIZES – GRAND PRIZE: One (1) grand prize of a trip for four (4) to Nashville, TN for Grand Prize Winner and three (3) guests to include: i) 100,000 AAdvantage® miles from American Airlines (ARV: $2,200), which may be used for air transportation on American Airlines or its “Airline Associates” (American Eagle® service, oneworld® airlines or select AAdvantage® participating airlines), car rentals, hotel stays and other awards available at AA.com/redeem; ii) four (4) nights hotel accommodations of (double occupancy/two standard rooms, room, tax and parking only) at a Marriott Hotel of the Sponsor’s choosing; iii) Dollar car rental for five (5) days (must meet standard rental qualifications); iv) $3,000 spending money to be awarded in the form of a check; v) Two (2) Music City Star Card Attraction Passes each valid for 2 people at over 30 area attractions and venues; and vi) Dave Ramsey Meet and Greet and Studio Tour to be conducted during a live production of The Dave Ramsey Show, and subject to availability and calendar of Dave Ramsey (the “Grand Prize”). Total ARV of the Grand Prize is $13,150.

Win a trip to Vail, Colorado!

ENTRY LIMIT – Limit of one (1) entry per person during the Sweepstakes Entry Period.

ELIGIBILITY – Yankee Candle® Mountain Holiday Sweepstakes is open only to legal residents of the fifty (50) United States (and the District of Columbia) and Canada (excluding Quebec), who are at least eighteen (18) years old at the time of entry.

PRIZES – Six (6) weekly prizes will be awarded. Weekly prize consists of a $1,000 Visa® gift card. Approximate retail value of a weekly prize is $1,000 USD.
– One (1) grand prize will be awarded. Grand prize winner will receive a 4-day/3-night trip to Vail, Colorado for winner and four (4) guests that is valued at $10,000 USD. Trip includes round-trip air transportation (coach) for up to five (5) people from a major U.S., airport nearest the winner’s home to Vail, Colorado, accommodations (two (2) standard rooms, double occupancy and triple occupancy for three (3) nights) , ground transportation to and from the airport in Vail, Colorado and lodging, and the remaining balance (from $10,000 USD if any) will be spending money awarded in the form of a check (collectively the “Grand Prize”). Instead of the trip to Vail, grand prize winner may elect to receive $10,000 USD in the form of a check. If winner lives within 150 miles of Vail, Colorado, ground transportation will be provided. All expenses and incidental travel costs not expressly stated in the package description above, including but not limited to, ground transportation, baggage fees, personal charges at lodging, security fees, or other expenses or incidentals are the responsibility solely of winner. Travel companions will be required to execute a Release of Liability/Publicity Release (where legal) prior to departure. Winner and travel companions must travel at the same time. Winner and travel companions are required to have all necessary travel documents (i.e., valid Government ID and/or Passport). Approximate retail value of grand prize is $10,000 USD.

WINNER’S LIST – For Sweepstakes results, send an email with the subject line of “Winners List –Yankee Candle® Mountain Holiday Sweepstakes” to info@syncmarketing.net. Requests for the Winners List must be received by February 28, 2020.

Win a trip for 4 anywhere in the US, $5,000 in Amazon gift cards, a Samsung Notebook 9 laptop, a Galaxy tablet and a Samsung device!

ENTRY LIMIT – There is a limit of one (1) Sweepstakes entry per calendar day during the Promotion Period.

ELIGIBILITY – This Promotion is offered only to legal residents of the fifty (50) United States and the District of Columbia, Puerto Rico and the U.S. Virgin Islands who are at least eighteen (18) years old at the time of entry.

PRIZES – Instant Win Game Prizes (5,100): The following Instant Win Game prizes are available during the Promotion Period (“Instant Win Game Prizes”): Instant Win Game Prize Description Quantity ARV (each)
A $5 Starbucks eGift card 2,500 $5
A $5 Amazon.com Gift Card 2,500 $5
One year of Amazon Prime membership (awarded as an Amazon.com digital promo code) 50 $120.
Sweepstakes Prize (1): The sweepstakes winner will receive a trip for four (4) (for winner and three [3] guests) to winner’s choice of destination city within the fifty (50) United States (up to $10,000 for total cost of trip) (“Sweepstakes Prize”). Trip includes round-trip coach class air transportation from a major commercial airport near winner’s residence to winner’s choice of destination city within the fifty (50) United States for winner and three (3) guests, standard hotel accommodations (two [2] rooms/double occupancy each) (number of nights of hotel stay will depend on the destination city and total cost of the trip; $10,000 limit for cost of entire trip), $5,000 in Amazon.com Gift Cards (for winner only), a Samsung Notebook 9 laptop, a Galaxy tablet (for winner only), and a Samsung device (device determined by Sponsor in its sole discretion). If cost of trip is under $10,000, winner will receive a check for the remaining amount. If the winner elects to travel or partake in the Sweepstakes Prize without a guest, no additional compensation will be awarded to the winner. Trip must be taken by September 13, 2019. Winner and guests must travel on the same itinerary. The actual value of the trip may vary depending on point of departure and fluctuations in the cost of air transportation. The ARV of the Sweepstakes Prize is $18,000.00 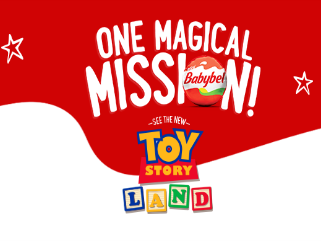 ENTRY LIMIT – There is a limit of one (1) Game Play and one (1) Sweepstakes entry per day during the Promotion Period.

ELIGIBILITY – This Promotion is offered only to legal residents of the fifty (50) United States and the District of Columbia who are at least eighteen (18) years old at the time of entry.

PRIZES – Instant Win Game Prizes: The following Instant Win Game prizes are available during the Promotion Period (“Instant Win Game Prizes”):
Instant Win Game Prize Description Quantity ARV (each) Total ARV
$100 Disney Gift Card eGift 25 $100 $2,500
$50 Disney Gift Card eGift 50 $50 $2,500
Mini Babybel Toy Story Land Backpack 100 $15.89 $1,589
Woody Action Figure 200 $29.95 $5,990
Mini Babybel Custom Viewfinder 350 $15 $5,250
Mini Babybel and Toy Story Land Co-Branded Lunchbox 500 $9.28 $4,640
Mini Babybel Themed Popsocket 1,500 $5.04 $7,560
$10 Disney Gift Card eGift 750 $10 $7,500
Bullseye Plush Figure with Sound 200 $29.99 $5,998
Sweepstakes Prize (1): The Sweepstakes winner will receive a six (6) day / five (5) night vacation package to the Walt Disney World® Resort for Sweepstakes winner and up to three (3) guests (individually, “Guest,” the Guests and Sweepstakes winner shall collectively be referred to as the “Group”) consisting of the following elements for the Group: [1] hotel accommodations consisting of one (1) standard room/quad occupancy, including room tax) for five (5) consecutive nights at a Disney Moderate Resort at the Walt Disney World® Resort selected by Sponsor in its sole discretion; based on availability; [2] if Sweepstakes winner’s residence is located more than 250 miles from the Walt Disney World® Resort, up to four (4) round-trip coach airfare transportation tickets (with possible layovers) for the Group on a Sponsor-selected carrier between a Sponsor-selected major metropolitan airport near Sweepstakes winner’s residence (“Airport of Origin”) and Orlando International Airport; but if Sweepstakes winner’s residence is located 250 miles or less from the Walt Disney World® Resort, then air transportation or any other form of transportation will not be provided to the Group; [3] up to four (4) round trip ground transfers between the Orlando International Airport and the hotel via Disney’s Magical Express® Motor Coach Service when air transportation is provided; [4] up to twenty-four (24) 1-Day Magic Your Way Tickets; [5] one (1) $750 Disney Gift Card for use while at the
Walt Disney World® Resort (subject to restrictions); and [6] a $2,000 check made payable to Sweepstakes winner. All elements are collectively the “Sweepstakes Prize”).
The ARV of the Sweepstakes Prize is $12,366.

ELIGIBILITY – The Sweepstakes is open only to legal residents of the 50 United States and Washington D.C., who are at least 18 years of age (or the age of majority in the jurisdiction of their residence, whichever is older).

Win a trip for 4 to Disneyland!

ENTRY LIMIT – Limit: Each entrant may enter/play one (1) time per day during the Promotion Period.

Win a trip of your choice: chose either – India, Thailand, Mexico or Costa Rica!

ELIGIBILITY – The Sweepstakes is open only to permanent legal residents of the fifty (50) United States and the District of Columbia who are at least eighteen (18) years of age or older and the age of majority in their state of primary residence at the time of entry.

PRIZES – The Grand Prize Winner will receive one (1) Grand Prize of a trip of his / her choice to either: India, Thailand, Mexico or Costa Rica, having a maximum Approximate Retail Value (“ARV”) of $5,000. The Grand Prize consists of a trip (as defined herein) for the Grand Prize Winner and one (1) guest (the “Travel Companion”). Trip will include; (a) round trip coach class air transportation for Grand Prize Winner and one (1) guest from a major commercial airport near Grand Prize Winner’s home (as determined by Sponsor in their sole discretion) to either India, Thailand, Mexico or Costa Rica; (b) six (6) nights standard hotel accommodations (one room, double occupancy, room and tax only) at a hotel to be determined by the Sponsor in their sole discretion); (c) ground transportation to and from airport and hotel in destination country; (d) dinner or a culinary experience in the destination country; and (e) cash in the amount of $250 USD to be used as spending money or at Grand Prize Winner’s sole choosing (to be awarded in the form of a check). Trip must be taken by April 30, 2019 or Grand Prize will be forfeited

ELIGIBILITY – The Sweepstakes is open to legal residents of the 50 United States, including the District of Columbia, age 21 or older at the time of entry.

PRIZES – Grand Prize: One (1) Grand Prize winner will receive a trip for up to four (4) (i.e., winner and up to three (3) guests), to Jackson Hole, Wyoming. Actual value of trip depends on location of winner’s primary residence, destination, fares at time of travel and land accommodations. If actual value of the trip is lower than ARV stated herein, the difference will not be awarded.

The Grand Prize consists of the following:
Round trip coach airfare for Grand Prize winner and up to three (3) guests to Jackson Hole, WY from a major airport within the 48 contiguous US nearest the winner’s residence as determined by Sponsor.
Up to Two (2) double-occupancy hotel rooms for two (2) nights/three (3) days at Spring Creek Ranch.
Up to Four (4) spa treatments, one (1) for winner and one (1) per each guest.
Round trip airport transfer in Jackson Hole, WY.
Airline and accommodations taxes and fees.

Win a trip for 4 to Biltmore in Asheville, N.C., a Balsam Hill Christmas tree and decorations!

ENTRY LIMIT – Entries received from any person or e-mail address in excess of the stated limitation (30 entries) will be void.

The winner must travel within the dates determined by the Sponsor in its sole discretion or the prize will be forfeited. Travel must be round trip . If the winner chooses to redeem this prize for less than four people, the difference in value will not be rewarded. Travel will only be valid in 2018.
Total approximate retail value of the prizes collectively is $4,348.80.