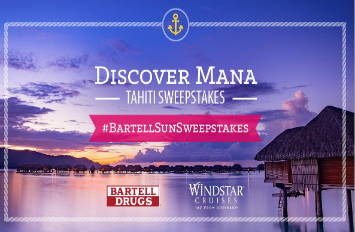 Win a trip to Tahiti! Open to Washington residents in 18 counties (see list below).

ENTRY LIMIT – In the Sweepstakes each member of the Fan Program will receive one (1) entry into the Sweepstakes after earning one hundred (100) points during a single Participation Period.

ELIGIBILITY – This Promotion is open to legal United States residents residing in one of the following counties of Washington State: King, Snohomish, Pierce, Skagit, Whatcom, Thurston, Kitsap, Lewis, San Juan Island, Clallam, Jefferson, Grays Harbor, Mason, Pacific, Wahkiakum, Cowlitz, Skamania or Clark, with at least 25 connections on a Social Network such as Facebook, LinkedIn or Twitter “Social Network”, who are at least eighteen (18) years of age and the age of majority in their jurisdiction of residence at the time of enrollment.