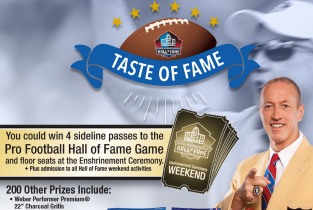 ENTRY LIMIT – Limit one (1) Sweepstakes entry per Day over the course of the Sweepstakes Period per person, Facebook account, email address or account, regardless of means of entry.

ELIGIBILITY – Participation open to legal residents of the fifty (50) United States and District of Columbia who are 18 years of age or older at the time of entry.

This site uses Akismet to reduce spam. Learn how your comment data is processed.